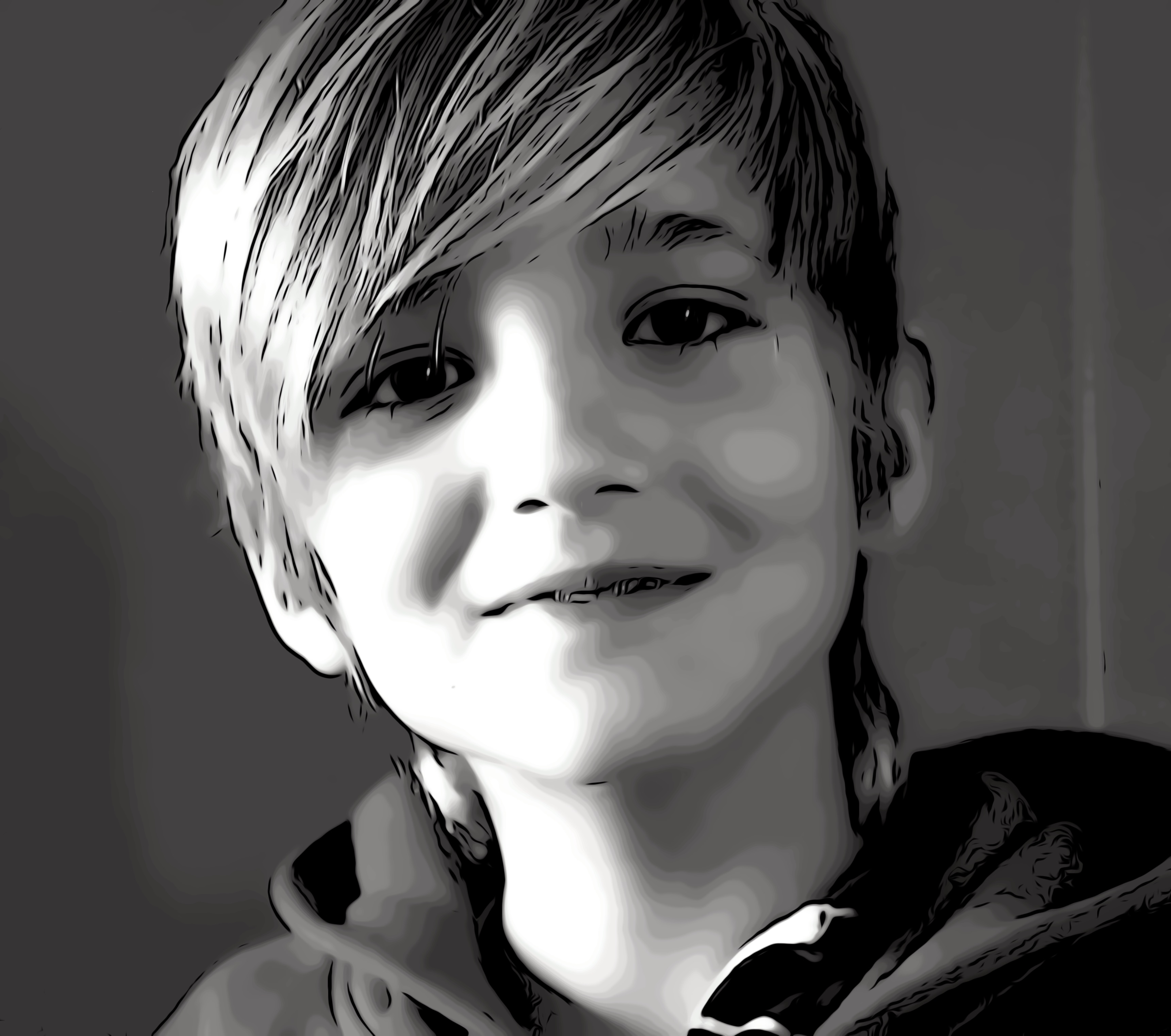 Grandson Caleb Wilson, who would have been about Marty’s age…

I first came acrosss this true story by Diane Rayner about her son Marty years ago when we lived up in Skagit County. I have read it aloud at Christmas gatherings a number of times since, and it never fails to move me deeply, even to tears. It so beautifully illustrates virtues like kindness, generosity, gentleness, humility, a servant’s heart, and more…and all from an eight year old little boy.

I grew up believing that Christmas was a time when strange and wonderful things happened; when wise and royal visitors came riding, when at midnight in the barnyard, animals talked to one another, and in the light of a fabulous star, God came down to us as a baby. Christmas to me has always been a time of enchantment, and never more so than the year when my son Marty was eight. That was the year that my children and I moved into a cozy trailer home in a forested area just outside of Redmond, Washington.

As the holidays approached, our spirits were light, unhampered even by the winter rains that swept down Puget Sound, dousing our home and making our floors muddy. Throughout that December, Marty had been the most spirited, and busiest of us all. He was my youngest; a cheerful boy, blond-haired and playful, with a quaint habit of looking up at you and cocking his head like a puppy when you talked to him. Actually, the reason for this was that Marty was deaf in his left ear, but it was a condition which he never complained about.

For weeks, I had been watching Marty. I knew that something was going on with him that he was not telling me about. I saw how eagerly he made his bed, took out the trash, carefully set the table and helped Rick and Pam prepare dinner before I got home from work. I saw how he silently collected his tiny allowance and tucked it away, not spending a cent of it. I had no idea what all this quiet activity was about, but I suspected that somehow it something to do with Kenny.

Kenny was Marty’s friend, and ever since they found each other in the springtime, they were seldom apart. If you called to one, you got them both. Their world was in a meadow, a pasture broken by a small winding stream, where the boys caught frogs and snakes, where they searched for arrowheads or hidden treasure, or where they would spend an afternoon feeding squirrels peanuts.

Times were hard for our little family, and we had scrimped and saved to get by. With my job as a meat wrapper and with a lot of ingenuity around the house, we were much better off than Kenny’s family. They were desperately poor, and his mother struggled to feed and clothe her two children. They were a good, solid family. But Kenny’s mom was a proud woman, very proud, and she had strict rules.

How we worked, as we did each year, to make our home festive for the holiday! Ours was a handcrafted Christmas of gifts hidden away and ornaments strung about the place. Marty and Kenny would sometimes sit still at the table long enough to help make cornucopias or weave little baskets for the tree. But then, in a flash, one whispered to the other, and they would be out the door and sliding cautiously under the electric fence into the horse pasture that separated our home from Kenny’s.

One night, shortly before Christmas, when my hands were deep in Peppernoder dough, shaping tiny nut-like Danish cookies heavily spiced with cinnamon, Marty came to me and said in a tone mixed with pleasure and pride, “Mom, I’ve bought Kenny a Christmas present. Want to see it?” So that’s what he’s been up to, I said to myself. “It’s something he’s wanted for a long, long time, Mom.” After wiping his hands on a dish towel carefully, he pulled from his pocket a small box. Lifting the lid, I gazed at the pocket compass that my son had been saving all those allowances to buy. A little compass to point an eight-year-old adventurer through the woods.

“It’s a lovely gift, Martin,” I said, but even as I spoke, a disturbing thought came to mind: I knew how Kenny’s mother felt about their poverty. They could barely afford to exchange gifts among themselves, and giving presents to others was out of the question. I was sure that Kenny’s proud mother would not permit her son to receive something that he could not return in kind. Gently, carefully, I talked over the problem with Marty. He understood what I was saying. “I know, Mom, I know! But what if it was a secret? What if they never found out who gave it?” I didn’t know how to answer him. I just didn’t know.

The day before Christmas was rainy and cold and gray. The three kids and I all but fell over one another as we elbowed our way about our little home, putting finishing touches on Christmas secrets and preparing for family and friends who would be dropping by. Night came. The rain continued. I looked out the window over the sink and felt an odd sadness. How mundane the rain seemed for a Christmas Eve! Would wise and royal men come riding on such a night? I doubted it. It seemed to me that strange and wonderful things happened only on clear nights, nights when one could at least see a star in the heavens.

I turned from the window, and as I checked on the ham and bread warming in the oven, I saw Marty slip out the door. He wore his coat over his pajamas, and he clutched a tiny, colorfully wrapped box in his hand. Down through the soggy pasture he went, then a quick slide under the electric fence and across the yard to Kenny’s house. Up the steps on tiptoe, shoes squishing, he opened the screen door just a crack; placed the gift on the doorstep, took a deep breath, and reached for the doorbell, and pressed on it hard. Quickly Marty turned, ran down the steps and across the yard in a wild effort to get away unnoticed. Then, suddenly, he banged into the electric fence. The shock sent him reeling. He lay stunned on the wet ground. His body quivered and he gasped for breath. Then slowly, weakly, confused and frightened, he began the grueling trip back home.

“Marty,” we cried as he stumbled through the door, “what happened?” His lower lip quivered, his eyes brimmed. “I forgot about the fence, and it knocked me down!” I hugged his muddy little body to me. He was still dazed and there was a red mark blistering on his face from his mouth to his ear. Quickly I treated the blister and, with a warm cup of cocoa, Marty’s bright spirits returned. I tucked him into bed and just before he fell asleep, he looked up at me and said, “Mom, Kenny didn’t see me. I’m sure he didn’t see me.”

That Christmas Eve I went to bed unhappy and puzzled. It seemed such a cruel thing to happen to a little boy on the purest kind of Christmas mission — doing what the Lord wants us to do — giving to others — and giving in secret at that. I did not sleep well that night. Somewhere deep inside I think I must have been feeling the disappointment that the night of Christmas had come and it had been just an ordinary, problem-filled night, no mysterious enchantment at all. However, I was wrong.

By morning the rain had stopped and the sun shone. The streak on Marty’s face was very red, but I could tell that the burn was not serious. We opened our presents, and soon, not unexpectedly, Kenny was knocking on the door, eager to show Marty his new compass and tell about the mystery of its arrival. It was plain that Kenny didn’t suspect Marty at all, and while the two of them talked, Marty just smiled and smiled. Then I noticed that while the two boys were comparing their Christmases, nodding, gesturing and chattering away, Marty was not cocking his head. While Kenny was talking, Marty seemed to be listening with his deaf ear. Weeks later, a report came from the school nurse, verifying what Marty and I already knew. “Marty now has complete hearing in both ears.”

The mystery of how Marty regained his hearing, and still has it, remains just that — a mystery. Doctors suspect, of course, that the shock from the electric fence was somehow responsible. Perhaps so. Whatever the reason, I just remained thankful to God for the good exchange of gifts made that night.

So you see, strange and wonderful things still happen on the night of our Lord’s birth. And one does not have to have a clear night either, to follow a fabulous star.