The greatest tragedy for any human being is going through their entire life believing the only perspective that matters is their own.

Our seeing is so limited when it is from one perspective only, but when we see an image from multiple perspectives, we then see that image three dimensionally.

Author’s note: One of my all time favorite movies is “Disney’s The Kid.” It makes a great study of the virtues, as the lead character played by Bruce Willis struggles with identity and self-worth. His perspective of himself and others is out of whack, and it makes him a miserable, joy-less person. People try to change him, tell him he must change…but until his perspective of himself and his life changes, he is stuck in his “stinkin’ thinkin!” You can search for “Disney’s The Kid” on Amazon or other movie content pages. Or borrow the DVD from me!

“Changing our perception, changing our inner landscape–nurturing the seeds of goodness within us–these acts change the world as truly as any other acts do…”

Marc Andrus from his book “Brothers in the Beloved Community, The Friendship of Thich Nhat Hanh and Martin Luther King Jr.”

Once upon a time, a shoe company was looking to expand its market…

The president tasked two employees with evaluating the potential of nearby regions. He sent one to the western plains and the other to the eastern plains.

A few days later, the first employee summarized his findings: “No potential here – no one wears shoes.”

Soon after, the second reported back: “Immense potential here – no one wears shoes.”

The right perspective, the tale tells us, can transform limiting circumstances into great opportunity.

“Therefore when someone else speaks of what is happening in his life, I must make a special effort to concentrate and listen. I have to force my thoughts and feelings at the moment to be smaller, and force my imagination to enlarge what he is saying in order to understand how it seems from his perspective.”

Author’s note: My favorite Death Cab for Cutie (songwriter Ben Gibbard) song is titled “No Room in Frame.” The lyrics speak for themselves, I will just say that Ben was married to and then divorced from actress Zoey Deschanel prior to writing the song!

A group of blind men heard that a strange animal, called an elephant, had been brought to the town, but none of them were aware of its shape and form. Out of curiosity, they said: “We must inspect and know it by touch, of which we are capable”. So, they sought it out, and when they found it they groped about it. In the case of the first person, whose hand landed on the trunk, said “This being is like a thick snake”. For another one whose hand reached its ear, it seemed like a kind of fan. As for another person, whose hand was upon its leg, said, the elephant is a pillar like a tree-trunk. The blind man who placed his hand upon its side said the elephant, “is a wall”. Another who felt its tail, described it as a rope. The last felt its tusk, stating the elephant is that which is hard, smooth and like a spear.

“As you live your life, it appears to be anarchy and chaos and random events, nonrelated events, smashing into each other… And later, when you look back at it, it looks like a finely crafted novel.”

2. a set of ideas, conditions, or assumptions that determine how something will be approached, perceived, or understood.

From Ferris Buehler’s Day Off:  (click on red arrow to start, or copy and paste link in your favorite search engine)

Before a recent flight from Dulles to Seattle, my plane was delayed on the tarmac for more than an hour.

It really didn’t bother me because I was looking forward to reading Lewis & Clark: The Journey of the Corps of Discovery by Dayton Duncan and Ken Burns.

However, my seatmate, “Ernie,” a burly, middle-aged fellow returning home from a business trip to D.C., was not taking things well.

“Why does this always happen?” he scowled. “I don’t care what an airline’s on-time arrival record is. It seems like my flight is always changed, delayed or cancelled.”

“I know the feeling,” I said and opened my book.

It was on the nation’s birthday, July 4, 1803, that President Thomas Jefferson announced to the nation that he had bought “Louisiana” from Napoleon.

The problem was no one really knew what Jefferson had bought. The territory had not been thoroughly explored.

So Jefferson commissioned Meriwether Lewis – who then hired William Clark as his co-commander – to cross the continent along with 38 other men and describe in detail the terrain, flora, fauna, climate and people they encountered along the way.

“I knew I was going to be crammed in this seat for six hours,” Ernie went on. “But who knows how long we’ll be stuck here now?”

I tried to commiserate a bit.

The Lewis and Clark Expedition – known at the time as The Corps of Discovery – set off from St. Louis up the great Missouri River to fill the void on the map and journal its descriptions of the western two-thirds of the continent.

It would not be an easy trip.

The men started off heading north, but the Missouri River flows south. Maneuvering their keelboat – loaded with 10 tons of supplies – against the current was a constant challenge. Often the men had to wade along the muddy banks and pull the boat forward with a rope.

Drifting logs slammed into them. The ropes broke. The mast got stuck in an overhanging tree and snapped off.

Mosquitoes – some as big as houseflies, according to Clark – swarmed around their faces and got into their eyes, ears and throats.

“You would think that with a delay this long, they would offer us a meal,” said Ernie, “or at least a cocktail.”

After two months, the Corps was still on the Missouri River. The men suffered from sore joints, dislocated shoulders, snakebites and occasional sunstroke. Some suffered ax wounds when cutting wood. Others broke out in boils from a bad diet. Their drinking water came from the river. All of them got dysentery.

Lewis was the expedition’s “doctor.” He bled his patients frequently and occasionally gave them laxative pills he bought from Dr. Benjamin Rush. They were so effective that the men referred to them as “Rush’s Thunderbolts.” They did not cure their ailments, however.

The Indians presented another problem. Some were curious and welcoming, providing the Corps with food and temporary shelter or trading horses and canoes. Other Indians intimidated travelers, demanded tribute, confiscated cargo or prevented travel upriver.

The men got their first serious test against the Lakota tribe, which demanded that the Corps hand over its supplies and turn back.

Clark told them that they must and would go on, declaring that his men “were not squaws but warriors.” The Lakotas notched their arrows. The Corps members raised their rifles…

“Plus, it’s freezing in here,” Ernie said. “Why in tarnation don’t they ease up on the air?” He pushed the button for a flight attendant.

Fortunately, the Lakota chief, Black Buffalo, defused the situation by changing the subject and suggesting that his tribe’s women and children be given a chance to see the keelboat and meet the explorers before they moved on.

(Things would not always work out this smoothly. On the return trip, members of the expedition were forced to kill two Blackfeet Indians when they awoke and found them stealing their horses and rifles.)

On the Great Plains, the men suffered from intense heat during the day and subzero temperatures at night.

When the expedition pushed into what is now Montana, sand blew in their faces, scratching their eyes.

Nearby Indians warned about a local predator, bears that were big, ferocious and famously ill-tempered. So, of course, the explorers set off to find and shoot one immediately.

A wounded grizzly chased two of the explorers back to the river, where they dived in just as a compatriot on the riverbank brought it down with a ninth bullet. Lewis wrote in his journal, “I find that the curiosity of our party is pretty well-satisfied with respect to this animal.”

“Why aren’t we moving?” said Ernie. “They should either take off or return to the gate. I’m going to write a letter to the airline. In fact,” he said, flipping open his laptop. “I’m gonna write it right now.”

When the expedition reached the Great Falls of the Missouri, the men had to portage around them. They used cottonwood trees to build rough carts and hauled their supplies across 18 1/2 miles of rocky ground under a broiling sun.

There were violent storms, prickly pear cacti, fleas, clouds of gnats and great swarms of mosquitoes. Lewis described the insects as “equal to any three curses that ever poor Egypt labored under.”

But the greatest obstacle was yet to come. Ahead of them lay, according to Corps member Patrick Gass, “the most terrible mountains that I ever beheld,” often steep as the roof of a house and covered with snow at the peaks.

Horses slipped and rolled down the embankments. Some gave out from exhaustion. The men roasted and ate them to stave off hunger.

Our captain came across the intercom and said we were now third in line for takeoff. “Finally,” Ernie scoffed.

In his journal, Lewis noted that his men suffered skin rashes, diarrhea, severe foot injuries and early signs of malnutrition. Meals were often sparse and often consisted of roots, dried fish, boiled elk – without salt or other seasoning – and water.

Nineteen months after it began, the Corps reached the Pacific coast, more than 4,100 miles from its starting point. Despite their many hardships, the men considered it the greatest triumph of their lives.

“O! the joy,” wrote Clark in his notebook on seeing the Pacific after a year and a half of perilous travel.

The Corps of Discovery had endured the scorching heat of the Great Plains, survived a harsh winter in Minnesota, suffered a boat accident in Montana, catapulted through the rapids of the mighty Columbia and blazed a fresh trail over the towering Rockies. (Lewis was even shot through the thigh by a one-eyed member of the expedition who mistook his buckskin-clad commander for an elk.)

The men exulted in their success. They had fought the elements, negotiated with the Indians, passed through the continental divide and reached the far coast. (Although they faced an equally daunting return.)

As our plane taxied to the gate in Seattle, Ernie awoke from a snooze. He looked at his watch.

“Eight grueling hours,” he said. “Why do we put ourselves through this? It’s inhumane.”

I nodded, stood up, stretched and opened the overhead compartment. 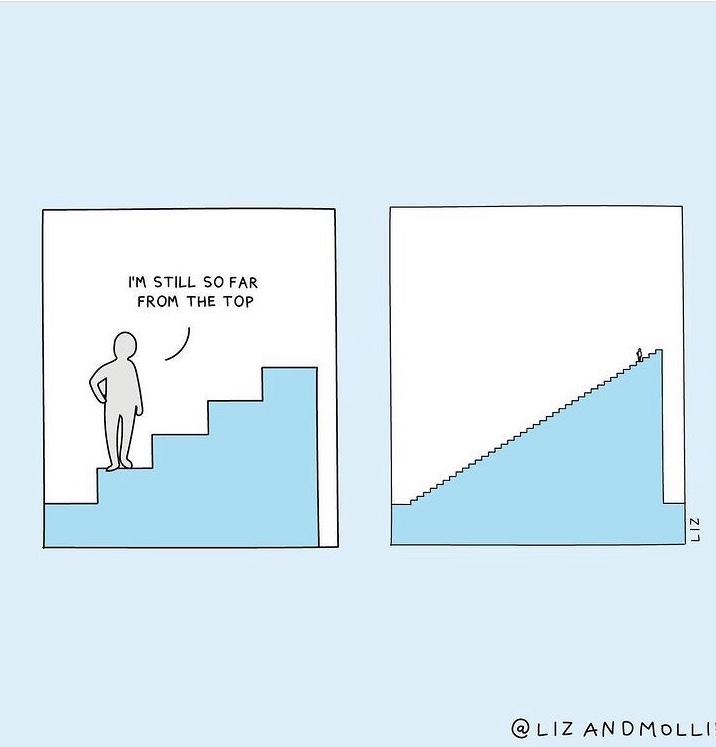 So if you’re serious about living this new resurrection life with Christ, act like it. Pursue the things over which Christ presides. Don’t shuffle along, eyes to the ground, absorbed with the things right in front of you. Look up, and be alert to what is going on around Christ—that’s where the action is. See things from his perspective.